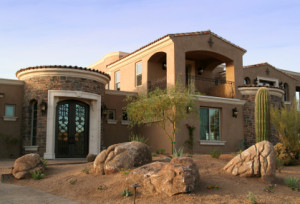 Over the years Tucson has grown to become a very popular destination for winter visitors, second home owners and retirees, in addition to substantial growth in business and industry and the jobs that go with it.

This popularity has contributed to thousands of Tucson homes being built in new residential subdivisions springing up all around Tucson – in the Northwest (Oro Valley), West, South and Southeastern Tucson – but not so much in the Catalina Foothills. And that’s an important distinction.

The key reason –  a very limited supply of vacant buildable land, and certainly no large tracts of land, plus zoning regulations that typically designate residential lots as one home per acre, the Catalina Foothills have not experienced that kind of development. The Foothills is a relatively small,(about 36 sq. miles) established area, that is pretty much built out, so what you see is what will be, with, of course, some exceptions.

And like many other cities and towns across the US the Foothills did not escape the extreme highs and lows of the real estate boom and subsequent bust and, for Tucson, a slow though fairly steady recovery that followed 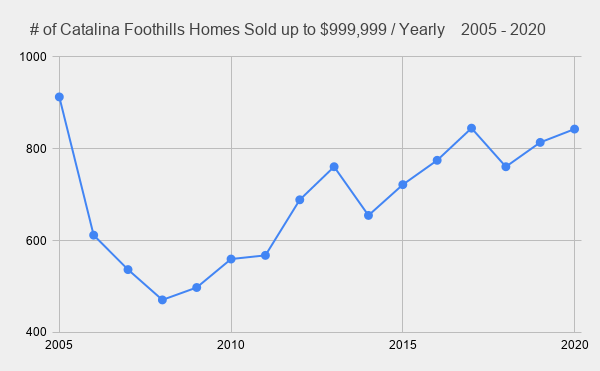 Whoa, as you see in the above chart, the big drop-off in foothills sales occurred in 2006, though, take note that the drop in sales was in homes priced under $1,000,000. 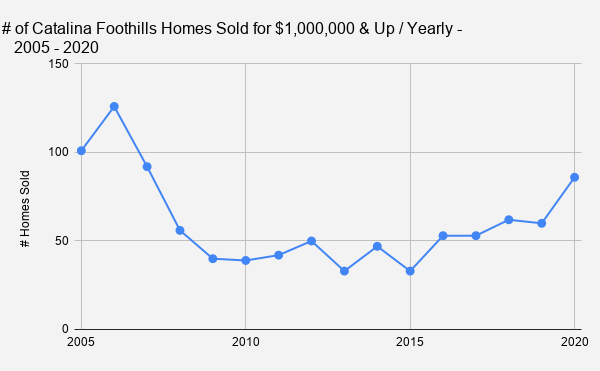 Oddly enough, as home sales fell, and very steeply in 2006, home prices continued to rise before finally succumbing to the drag of a slower market in late 2007. Prices then continued to fall, and steeply, until finally  bottoming out in 2012. Since then prices have risen, but slowly, that is until 2020 when prices rose over 14% in 2020 alone. Since bottoming out in  2012 median sold prices are up 45% thru 2020.
See my blog –TheTucsonFoothills.com for the latest sales and market data. 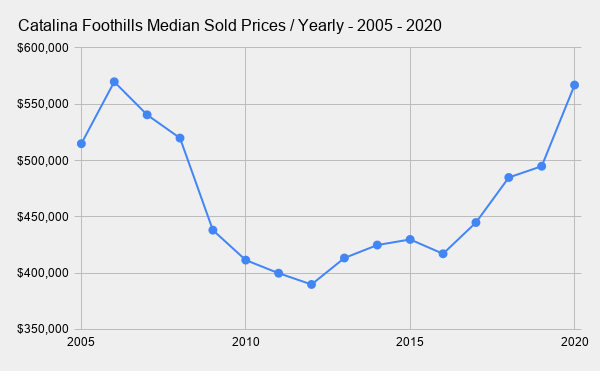 The ups and downs of the luxury market 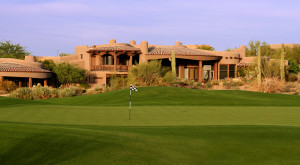 In 2000 Pima Canyon opened for business in the Tucson Foothills, adding almost 300 luxury home sites to the Foothills in one fell swoop. Developed on the last large parcel of land, with wonderful mountain, canyon and city views, Pima Canyon is now mostly built out, with homes for sale starting at about $1,000,000 and going up to $4.0mil or more.

At the other end of the spectrum is Skyline Country Club Estates, built in the 60’s and 70’s, it was the first luxury golf community in the Foothills. By late 2003, as the country began to recover from 9/11, Tucson started to catch the attention of more luxury home buyers, yet buildable land in the Foothills was becoming very scarce.

Enter Skyline Country Club. It began to go thru a re-birth, a renaissance.
Skyline has some of the best home sites in the Foothills, high up, and with magnificent views,and all of it in a very private, gated-golf course community.
Homes that are old and out-dated, and quite a few of them are in Skyline CC, are either being knocked down and re-built or extensively renovated. And because the land is so valuable, economics dictates building larger more expensive homes on those lots. See my post – teardowns in the Tucson Foothills for more on this.

Two other unmistakable signs of the scarcity of buildable land in the Catalina Foothills was the boom time trends of building luxury homes on what I’ll politely call in-fill lots – less desirable lots scattered here and there throughout the Foothills – and the breaking up of the original multi-acre Catalina Foothills estates homes – homes that were built in the 1930’s and 40’s – and subdividing the land to build new luxury homes on one acre lots. See my post- going through changes with a Joesler in the Tucson Foothills for more on this trend.

However, this rush to luxury home building in the Catalina Foothills got to the point where the supply of luxury homes far outstripped the demand. And as the market continued to weaken the disparity between supply & demand led to the growth of high-end distress sales. And while the era of distress sales is now well behind us, and the luxury market has perked up some in the last few years, and more so in 2020, it is still doing many fewer sales than it did during those few boom  years.

But despite the fluctuations of the market, the Catalina Foothills continues to attract those who appreciate its natural beauty, gorgeous climate (for much of the year) and its easy southwest lifestyle.
I hope you enjoy it!

© 2022 The FootHills Today | All Rights Reserved | Crafted by BOUNDLESS